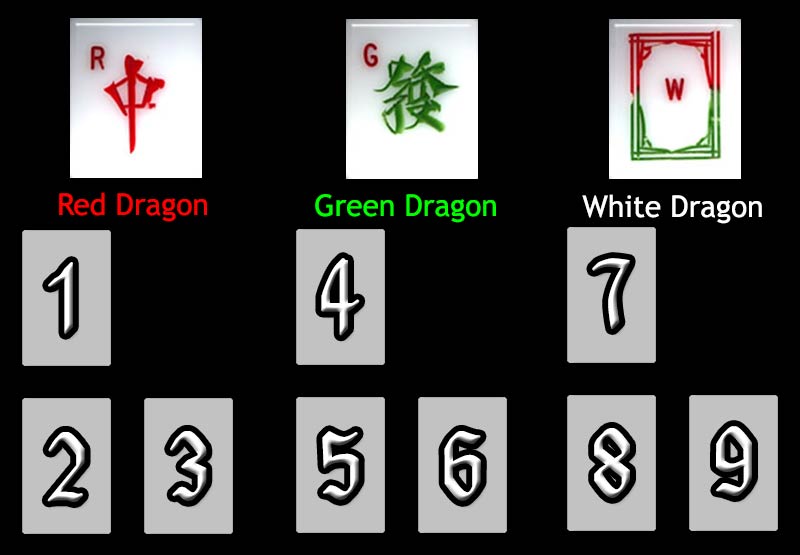 In Chinese culture the Dragon is generally considered a sign of great luck and power. However in mahjong, the red, green, and white dragons represent three distinct influences that can affect your life. The Dragon Reading creates a relationship between sets of tiles to each Dragon, to explore how the 3 Dragons will influence you now and in the near future.

The Red Dragon tile is indicative of success and the fulfillment of your goals.

The Pine Tree tile represents strength and resolve. It often refers to a powerful, determined man. While powerful, this person is not violent, but very skilled in attaining his goals through diplomacy.

The White Tiger tile is epitomizes masculinity in its purest form. The male represented by the White Tiger is brave and assertive. He will fight to protect what he feels is right.

A cunning and wiley hunter, though aloof and somewhat of a loner. The cat's eyes are said to drive evil spirits away, especially at night because of the way they seem to glow in the dark. The cat is symbolic of nighttime and represents a light in the dark, a guiding spirit.

A proud and dominant animal who likes to strut his stuff. The rooster is the ultimate symbol of reliability and punctuality, as he never misses his morning duty of crowing at the dawn. Naturally this creature symbolizes new beginnings. Also he is a protector of the home domain.

The Woodcutter employs three of the 5 elements central to Chinese philosophy: Fire, Wood and Metal. He is ambitious and full of drive and energy. He represents gain and success through dedicated work.