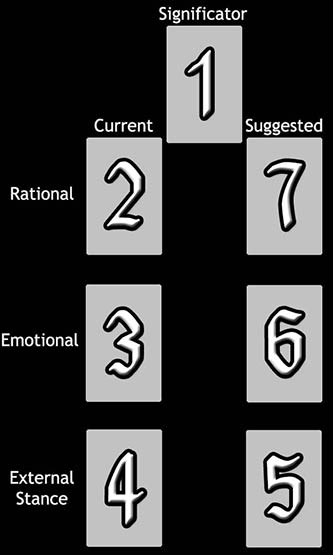 For the Path reading, one asks for suggestions how to behave properly to achieve a desired result. The Current column represents how the reader has been acting, and the Suggestedcolumn suggests how they should act to achieve a certain goal. The chart-like layout uses the standard three levels: Rational, Emotional, and External Stance (how one projects oneself outwardly). When comparing the Current and Suggested dominoes, the most important thing is to notice the differences between the two dominoes. It is these differences which hint at the behaviours that should be altered.

Domino #1 is the significator, the domino which should reflect the nature of the query and/or the desired outcome.

Domino #2 shows the way the reader is and has been thinking. Domino #7 suggests how to change the way one thinks to serve themselves better.

Domino #3 suggests the reader's emotional attitude. Though it may seem difficult to manipulate one's own emotions, it can be done if one puts their mind to it. For example, acting a certain way such as smiling intently for a few minutes will lead the emotions to follow. When a person tries this, as silly as the exercise seems, they find this to evoke the emotion of happiness. For this reading, one should try to make themselves feel the way that Domino #6 suggests.

External Stance means how one acts outwardly, how they hope others see them. Domino #4 is about how the reader has been acting, while #5 indicates how they should act outwardly, for other people's sake. It is the differences between these dominoes that hint at what behaviour patterns should be altered.

Your world is about to become more harmonious. All the pieces will come together, and personal power will take form, leading to a heightened level of confidence. However, for this to occur you must be open to change and embrace new ideas.

This sign indicates a great disturbance, and that happiness will be destroyed. There is most likely an enemy, perhaps even a lawsuit. Black magic may have been performed against you. You are being harmed by reciprocal fighting, gossip, or by having gone to a place of much quarrelling. Nothing you do will produce successful results unless you intend to do harm. Now is the time to confront your enemies and settle differences. You should try to find a positive way to vent negative emotions, such as taking action against a perceived injustice. Rituals of making yellow clay stupas representative of deities, saints, or sacred happenings would be beneficial.

The sign of 'The Stainless Sky' suggests that you should listen carefully to the spirits of the air. Your mind should be cleansed of impure thoughts. This sign also suggests that to retain friends or wealth, small offerings should be made. Generally, this is an average sign, neither bad nor good.

The time is at hand to pursue new ventures. Your wishes will be accomplished, exceeding all expectations. The study of logic will bear tremendous fruit, as would diligent meditation upon your special deity or spirit guide. Partnerships are extremely well-favoured. Opportunities may seem too good to be true, but hear them out fully before ruling anything out.

This sign is also known as 'the wish-fulfilling tree'. There will be quick success. Matters involving the delivery of news are particularly favourable. Decorations and streamers are very effective.

Your pursuits are spoiled; hopes are scattered like dust in the wind. You would be well advised to perform suppression rituals, burial rituals, or a peaceful fire ritual. Enemies wish you ill. Welcome visitors bring bad news. You have accumulated bad energies through faulty decisions, and you may need to retrace your steps to see where things went wrong.

Also known as 'the wish-fulfilling cow', this sign indicates an increase in happiness. It may appear that an evil spirit has recently attacked you, but this is not the case. You should be content to know that this setback was necessary, as it is sometimes necessary to take a step back in order to take two steps forward.