This is probably the most common spread. A good basic spread for beginners to use for practice, the Celtic Cross is useful for questions of all types. In this spread it can be helpful to notice the relationships between the pairings of cards #5 & #9, #1 & #2, #3 & #4, and #6 & #10.

This is the dark side of The Magus; the lower self. The Demiurge has come out to play. Many are struck down on their quest to the top. Only the chosen one can climb the stairway to heaven. He must first acquire the proper understandings and tools or his climb will certainly be disastrous. Now is the time to use what you've been building up inside. Often a card of war.

Meaning:
Danger, destruction, quarrel, combat, ambition. Escape from prison. Rise to the top at the expense of others. 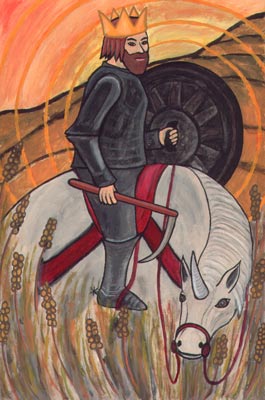 The Crossing Card denotes an added impulse that compounds the initial card, whether complimentary or contradictory. Knight of Disks

The Knight of Disks rides the pale horse. His horse is in fact an unicorn, a symbol of Virgo. Bearing the sickle, he has come to reap the harvest. The shield radiates waves of energy that symbolize his connection with the sphere of earth. He is concerned primarily with material values. 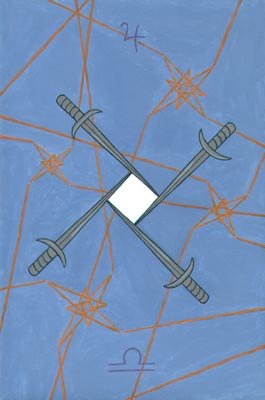 The Crown stands for what the asker is aware of consciously. 4 of Swords - Truce

Four swords come together in union. The square formed in the center is a white flag. This card represents reconciliation. The Process.

Meaning:
Recovery from a period of trouble. An oasis. Authority in the realm of intellect. Establishment of dogma. 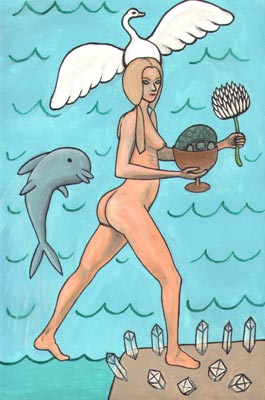 Foundation card reveals unconscious driving forces that the querent may not be aware of. Princess of Cups

A voluptuous young woman steps from the water onto land. Crystals form at her feet, symbolizing ideas taking shape. Her crown is a swan. In her right hand she carries a bronze cup with a tortoise inside it, and in her left hand she has a lotus. She is gentle, kind, and caring. This is a card of creation and formative energy. 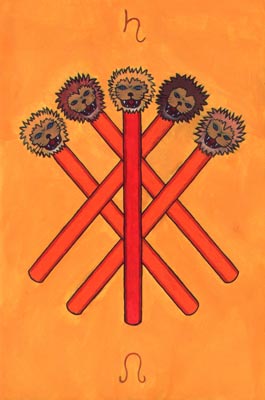 The Recent Past represents past events and concerns. 5 of Wands - Strife

Conflict. Five male lion heads together represent opposition and a battle of wills. The nature of each lion is to dominate his territory, so 5 in one place is not good. They butt heads in the struggle for supremacy.

The Future depicts that which lies ahead. Knight of Disks

The Knight of Disks rides the pale horse. His horse is in fact an unicorn, a symbol of Virgo. Bearing the sickle, he has come to reap the harvest. The shield radiates waves of energy that symbolize his connection with the sphere of earth. He is concerned primarily with material values. 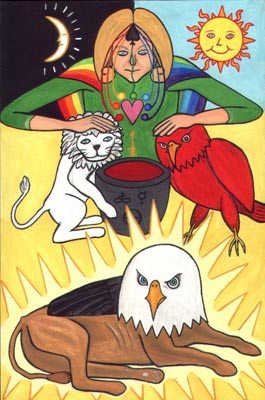 The Querent represents the asker and their attitude towards the subject of the reading. Art

Temperence or Alchemy. Creation by way of the marriage of opposites. You are what you create. An androgenous figure stirs the pot. The unity of opposite alchemical symbols (lion + eagle) has produced alchemical GOLD. 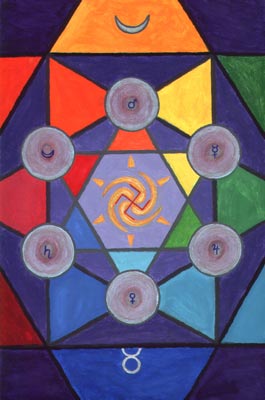 External Forces represents the influence of others in your life as well as trends in your relationships with others. 6 of Disks - Success

Understanding is represented in this card by the coloration of the stained glass in the form of a rainbow spiral. The six moons revolve around the swastika-sun, each also representing a day of the week. Everything is in order here, as you achieve what you set out to do. 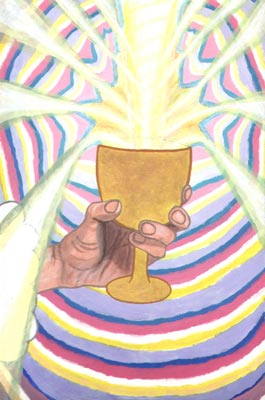 Hopes and Fears shows the expectations you have concerning the outcome of your question. Ace of Cups

The Outcome of your question. Interpret this card in the context of the entire reading and as an indicator of the path you are currently on, but not necessarily bound to. 8 of Disks - Prudence

This card is about the virtue of patience, or taking things in their proper times. Eight clocks are hung from Jacob's Ladder. With effort dreams will be attainable. Remember: one step at a time.

Meaning:
Industriousness, agriculture, building, construction, intelligence in material affairs.
When ill-dignified: too much care spent on details at the expense of the big picture.