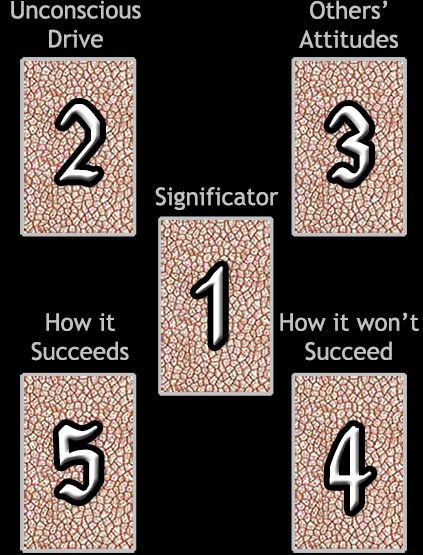 The four Living Creatures of Ezekiel occupy the angles of the card, and the wheel itself follows other indications of Levi in respect of Ezekiel's vision, as illustrative of the particular Tarot Key. With the French occultist, and in the design itself, the symbolic picture stands for the perpetual motion of a fluidic universe and for the flux of human life. The Sphinx is the equilibrium therein. The transliteration of Taro as Rota is inscribed on the wheel, counter changed with the letters of the Divine Name – to shew that Providence is imphed through all. But this is the Divine intention within, and the similar intention without is exemplified by the four Living Creatures. Sometimes the sphinx is represented couchant on a pedestal above, which defrauds the symbolism by stultifying the essential idea of stability amidst movement.

Behind the general notion expressed in the symbol there lies the denial of chance and the fatality which is implied therein. It may be added that, from the days of Levi onward, the occult explanations of this card are – even for occultism itself – of a singularly fatuous kind. It has been said to mean principle, fecundity, virile honour, ruling authority, etc. The findings of common fortune-telling are better than this on their own plane.

Vigilance, retreat, solitude, hermit's repose, exile, tomb and coffin. It is these last that have suggested the design. 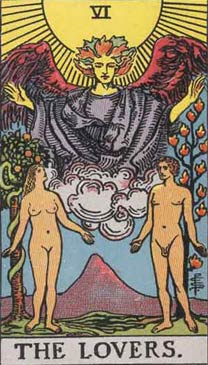 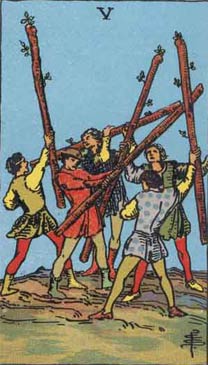 A posse of youths, who are brandishing staves, as if in sport or strife. It is mimic warfare.

Imitation, as, for example, sham fight, but also the strenuous competition and struggle of the search after riches and fortune. In this sense it connects with the battle of life. Hence some attributions say that it is a card of gold, gain, opulence.

He has a form of the Crux ansata for his sceptre and a globe in his left hand. He is a crowned monarch – commanding, stately, seated on a throne, the arms of which axe fronted by ram heads. He is executive and realisation, the power of this world, here clothed with the highest of its natural attributes. He is occasionally represented as seated on a cubic stone, which, however, confuses some of the issues. He is the virile power, to which the Empress responds, and in this sense is he who seeks to remove the Veil of Isis; yet she remains virgo intacta.

It should be understood that this card and that of the Empress do not precisely represent the condition of married life, though this state is implied. On the surface, as I have indicated, they stand for mundane royalty, uplifted on the seats of the mighty; but above this there is the suggestion of another presence. They signify also – and the male figure especially – the higher kingship, occupying the intellectual throne. Hereof is the lordship of thought rather than of the animal world. Both personalities, after their own manner, are full of strange experience, but theirs is not consciously the wisdom which draws from a higher world. The Emperor has been described as (a) will in its embodied form, but this is only one of its applications, and (b) as an expression of virtualities contained in the Absolute Being – but this is fantasy.