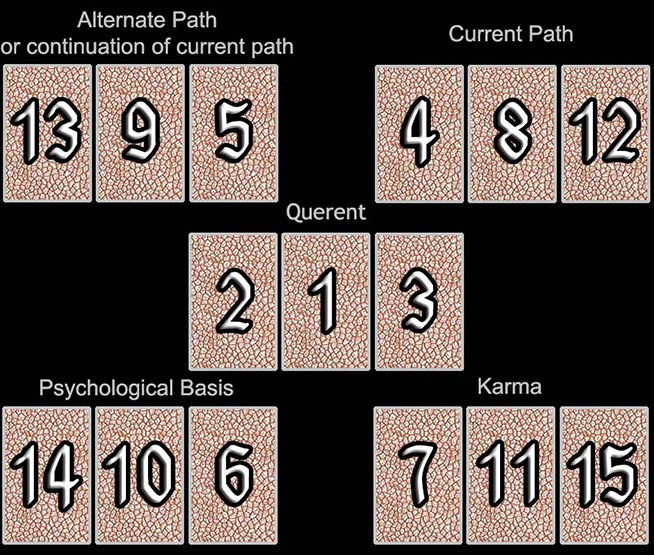 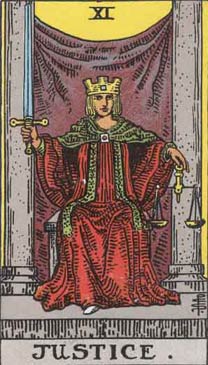 The figure is seated between pillars, like the High Priestess, and on this account it seems desirable to indicate that the moral principle which deals unto every man according to his works - while, of course, it is in strict analogy with higher things; - differs in its essence from the spiritual justice which is involved in the idea of election. The latter belongs to a mysterious order of Providence, in virtue of which it is possible for certain men to conceive the idea of dedication to the highest things. The operation of this is like the breathing of the Spirit where it wills, and we have no canon of criticism or ground of explanation concerning it. It is analogous to the possession of the fairy gifts and the high gifts and the gracious gifts of the poet: we have them or have not, and their presence is as much a mystery as their absence. The law of Justice is not however involved by either alternative. In conclusion, the pillars of Justice open into one world and the pillars of the High Priestess into another.

Equity, rightness, probity, executive; triumph of the deserving side in law. 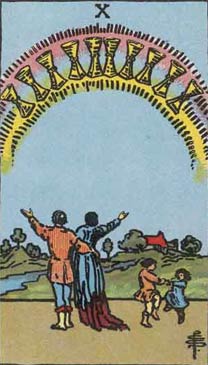 Appearance of Cups in a rainbow; it is contemplated in wonder and ecstacy by a man and woman below, evidently husband and wife. His right arm is about her; his left is raised upward; she raises her right arm. The two children dancing near them have not observed the prodigy but are happy after their own manner. There is a home-scene beyond.

Contentment, repose of the entire heart; the perfection of that state; also perfection of human love and friendship; if with several picture-cards, a person who is taking charge of the Querent's interests; also the town, village or country inhabited by the Querent. 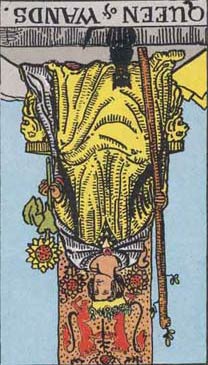 The Wands throughout this suit are always in leaf, as it is a suit of life and animation. Emotionally and otherwise, the Queen's personality corresponds to that of the King, but is more magnetic.

Good, economical, obliging, serviceable. Signifies also - but in certain positions and in the neighbourhood of other cards tending in such directions - opposition, jealousy, even deceit and infidelity. 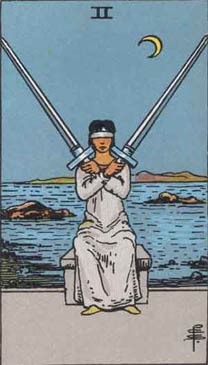 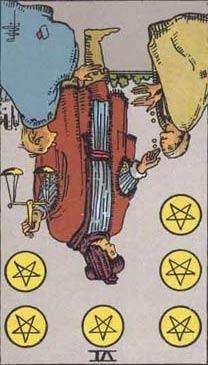 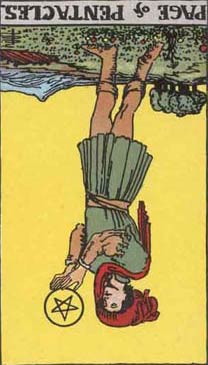 A youthful figure, looking intently at the pentacle which hovers over his raised hands. He moves slowly, insensible of that which is about him. 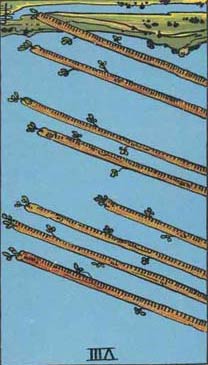 The card represents motion through the immovable - a flight of wands through an open country; but they draw to the term of their course. That which they signify is at hand; it may be even on the threshold.

Arrows of jealousy, internal dispute, stingings of conscience, quarrels; and domestic disputes for persons who are married. 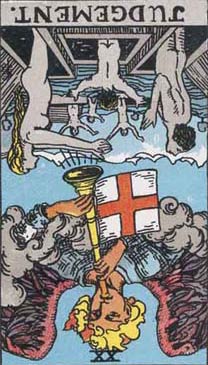 The great angel is here encompassed by clouds, but he blows his bannered trumpet, and the cross as usual is displayed on the banner. The dead are rising from their tombs - a woman on the right, a man on the left hand, and between them their child, whose back is turned. But in this card there are more than three who are restored, and it has been thought worth while to make this variation as illustrating the insufficiency of current explanations. It should be noted that all the figures are as one in the wonder, adoration and ecstacy expressed by their attitudes. It is the card which registers the accomplishment of the great work of transformation in answer to the summons of the Supernal - which summons is heard and answered from within.

Herein is the intimation of a significance which cannot well be carried further in the present place. What is that within us which does sound a trumpet and all that is lower in our nature rises in response - almost in a moment, almost in the twinkling of an eye? Let the card continue to depict, for those who can see no further, the Last judgment and the resurrection in the natural body; but let those who have inward eyes look and discover therewith. They will understand that it has been called truly in the past a card of eternal life, and for this reason it may be compared with that which passes under the name of Temperance. 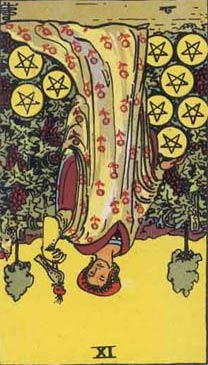 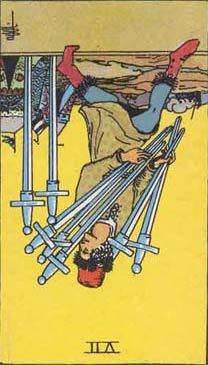 A man in the act of carrying away five swords rapidly; the two others of the card remain stuck in the ground. A camp is close at hand. 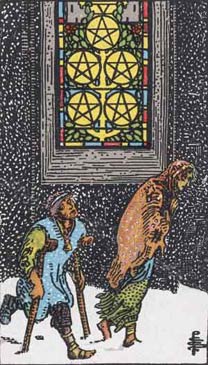 The card foretells material trouble above all, whether in the form illustrated - that is, destitution - or otherwise. For some cartomancists, it is a card of love and lovers - wife, husband, friend, mistress; also concordance, affinities. These alternatives cannot be harmonized. 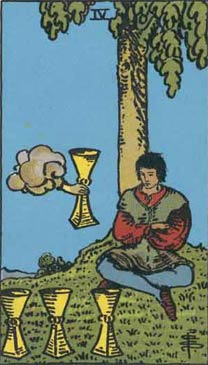 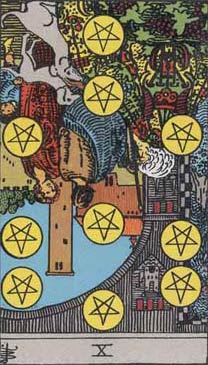 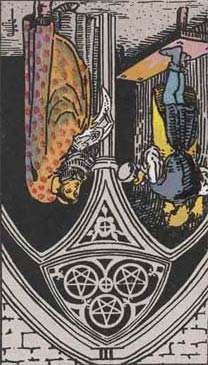 A sculptor at his work in a monastery. Compare the design which illustrates the Eight of Pentacles. The apprentice or amateur therein has received his reward and is now at work in earnest. 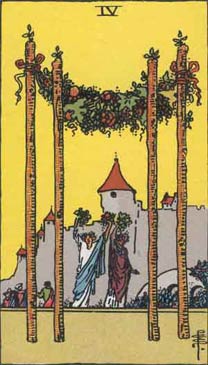 From the four great staves planted in the foreground there is a great garland suspended; two female figures uplift nosegays; at their side is a bridge over a moat, leading to an old manorial house.

They are for once almost on the surface - country life, haven of refuge, a species of domestic harvest-home, repose, concord, harmony, prosperity, peace, and the perfected work of these.