The Two always represents the Word and the Will. It is the first manifestation. Therefore, in the suit of Water, it must refer to Love, which recovers unity from dividuality by mutual annihilation. The card also refers to Venus in Cancer. Cancer is, more than any other, the receptive Sign; it is the House of the Moon, and in that Sign Jupiter is exalted. These are, superficially, the three most friendly of the planets.

The hieroglyph of the card represents two cups in the foreground, overflowing upon a calm sea. They are fed with lucent water from a lotus floating upon the sea, from which rises another lotus around whose stem are entwined twin dolphins.

The number Two referring to Will, this card might really be renamed the Lord of Love under Will, for that is its full and true meaning. It shows the harmony of the male and the female: interpreted in the largest sense. It is perfect and placid harmony, radiating an intensity of joy and ecstasy.

Pure, exalted and gracious influence enters the matter. Hence, change, alternation, increase and decrease, fluctuation. There is, however, a liability to be led away by enthusiasm; one may become "moon-struck" unless careful balance is maintained.

In this card is the pageant of the culmination and perfection of the original force of Water. In the symbol are nine cups perfectly arranged in a square; all are filled and overflowing with Water. It is the most complete and most beneficient aspect of the force of Water. 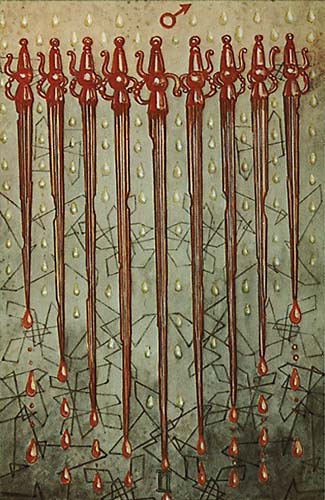 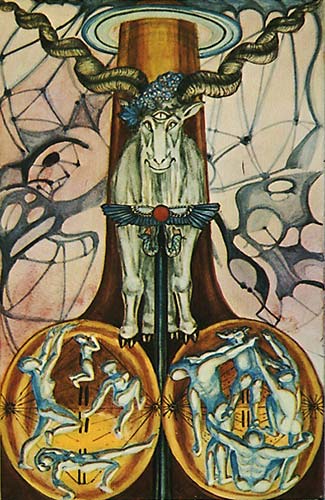 This card represents the essence of the element of Fire in its inception. It is a solar-phallic outburst of flame from which spring lightnings in every direction. These flames are Yods, arranged in the form of the Tree of Life.

It is the primordial Energy of the Divine manifesting in Matter, at so early a stage that it is not yet definitely formulated as Will.

Lotuses droop for lack of sun and rain, and the soil is poison to them; only two of the stems show blossoms at all. The cups are shallow, old and broken. They are arranged in three rows; of these the upper row of three is quite empty. Water trickles from the two flowers into the two central cups, and they drip into the two lowest without filling them. The background of the card shows pools, or lagoons, in very extensive country, incapable of cultivation; only disease and miasmatic poison can flourish in those vast Bad Lands. The water is dark and muddy. On the horizon is a pallid, yellowish light, weighed down by leaden clouds of indigo.

The operation of his logical mental processes have reduced the Air, which is his element, to many diverse geometrical patterns, but in these there is no real plan; they are demonstrations of the powers of the Mind without definite purpose. In his right hand is a lifted sword wherewith to create, but in his left hand a sickle, so that what he creates he instantly destroys. A person thus symbolized is purely intellectual. He is full of ideas and designs which tumble over each other. He is a mass of fine ideals unrelated to practical effort. He has all the apparatus of Thought in the highest degree, intensely clever, admirably rational, but unstable of purpose, and in reality indifferent even to his own ideas, as knowing that any one of them is just as good as any other. He reduces everything to unreality by removing its substance and transmuting it to an ideal world of ratiocination which is purely formal and out of relation to any facts, even those upon which it is based.